Citizen Science shines with its own light in Tomelloso and Baza, placing them on the European scientific map!

On October 10 and 11, the citizen science project Melanogaster: Catch the Fly! (#MelanogasterCTF) was launched by Dr. Josefa González, scientific director of the project, LCATM, and students and teachers from  José de Mora High School and Eladio Cabañero High School from the towns of Baza (Granada) and Tomelloso (Ciudad Real). The days of capture and classification of specimens of the fruit fly Drosophila melanogaster started in fruit fields of the Spanish towns with a resounding success of participation, both in the capture of the specimens and in their classification and preparation. For sure that the fruit fly will not go unnoticed in these locations again!

Dr. Josefa González welcomed the conference with a presentation of the #MelanogasterCTF citizen science project in each of the participating educational centers. The presentation allowed us to refresh concepts related to the scientific project and its objectives, which had previously been presented to the students with teaching material that LCATM had made available to the high school teachers. These educational materials had been produced by scientists and communicators not only to explain the details of the research but also to convey the importance of the project, as well as the importance of citizen participation in it.

Participating students and teachers, Dr. González and the LCATM team traveled to nearby fruit fields to begin the collections. In the fields, Dr. González ended up giving some instructions on the use of the collection material, the capture techniques, and some final practical advice, along with the pertinent safety recommendations. 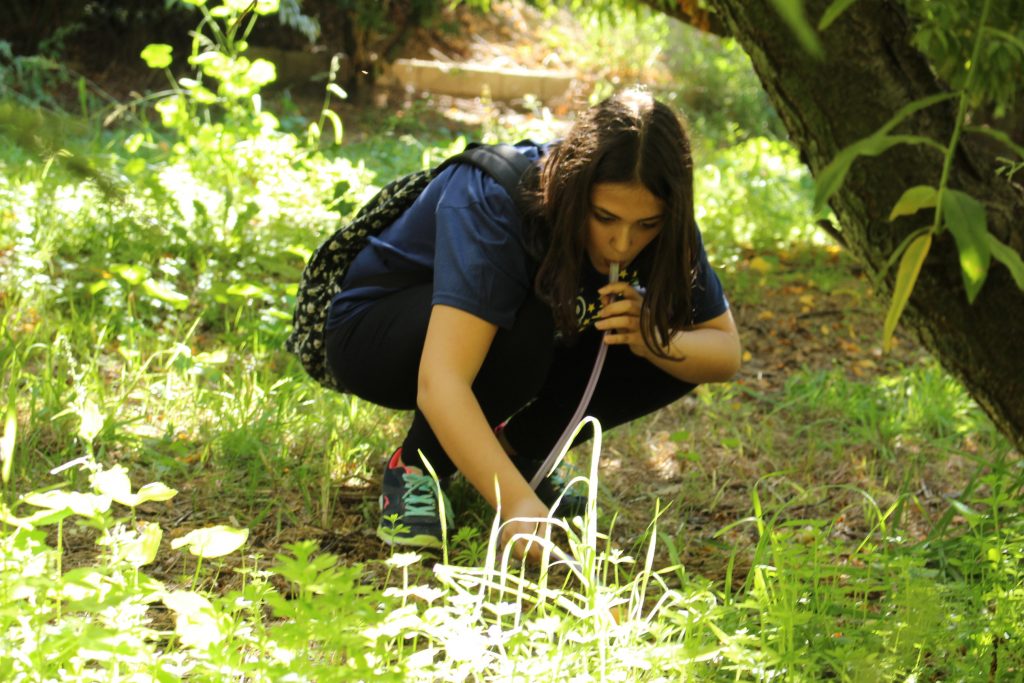 The novice and enthusiastic participants began their collections, covering, with great success, the largest possible area of ​​land in order to achieve greater variability in fly populations. It didn’t take long for young scientists to become adept and skillful “catchers” of fruit flies, competing amicably with each other for the biggest collection. Soon, the valuable fruit of teamwork, as well as the invaluable usefulness and significance of citizen science, could be seen, having to collect a large number of copies thanks to the enthusiasm, collaboration, and effort of the students and their hardworking teachers. 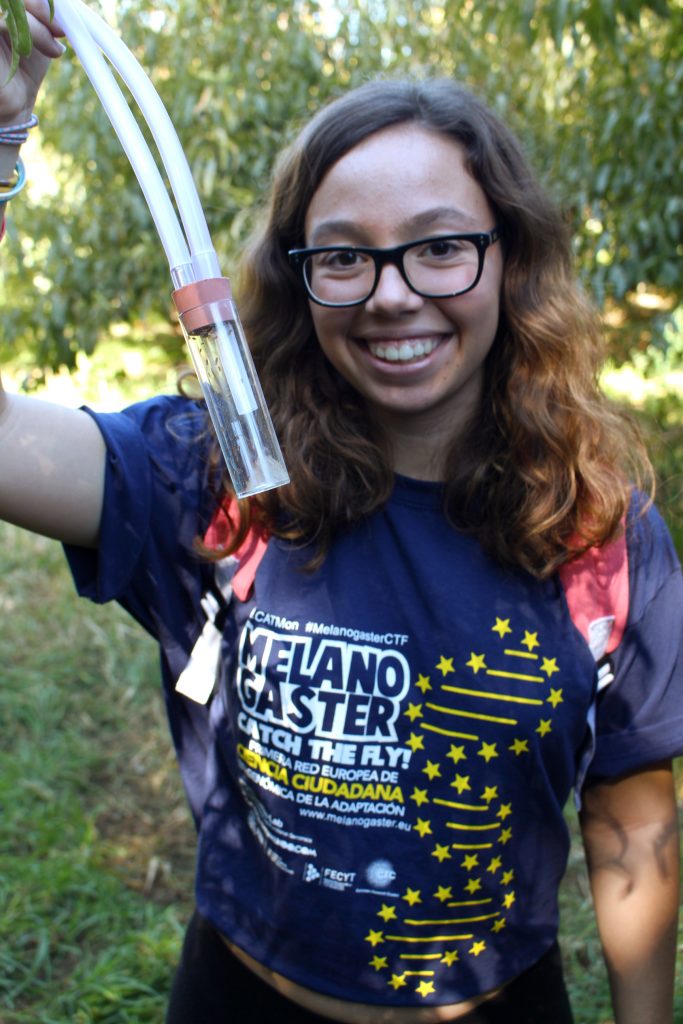 With the entomological aspirators (the instrument used to collect) full of fruit flies, and many anecdotes from the fieldwork to share along the way, it was time to return to the laboratory to analyze and classify the samples. #MelanogasterCTF transformed for one day the institute’s practice laboratory into one of frontier science research since the data generated there will be used for the development of the European scientific research project on adaptation genomics led by Dr. González and shared by the more than 30 laboratories from up to 20 European countries that make up the DrosEU European Consortium, coordinated by Dr. González herself. Following the correct protocols, Dr. González showed the identification and classification techniques with which to analyze the collected specimens, while constantly stressing the importance of scientific rigor and the value of the data that was about to be generated.

“There was a lot of attention, excitement, and nervousness hovering around the lab as I started handling the flies. However, the youngsters soon adopted the technique of separating, putting to sleep, and classifying the collected specimens, trying not to lose any in the process. And the most complicated thing, they learned to differentiate between males and females of Drosophila melanogaster and Drosophila simulans, for which the use of binocular loupes was necessary. The Baza and Tomelloso teams were at all times “hunting them on the fly”, that is, demonstrating a rapid understanding and assimilation of the concepts and protocols, and knowing how to measure up to the scientific project of which they are now part”, according to Dr. González.

In both Baza and Tomelloso, the sessions ended after the scheduled time due to the great motivation and involvement of the participants, who did not give up in their eagerness to identify, among the collected populations, new male specimens of Drosophila melanogaster, the candidates to be sequenced in the scientific project. In the words of the teachers, it has been a very gratifying experience to see how the students asked to continue with the classification task despite having spent all day in the institute or even having returned to it voluntarily after completing various extracurricular activities.

In the words of Dr. González and the LCATM team, to bet on citizen science has been a success and a great pleasure, by sharing #MelanogasterCTF with volunteers as enthusiastic and dedicated as those who emerged from José de Mora and Eladio Cabañero high schools, in Baza and Tomelloso.

We thank all participants for their great work, especially teachers David Gallardo and Antonio J. Buendía for their support and trust in the project and the towns of Baza and Tomelloso for their warm welcome. Thank you all for the shared “flight hours”! From LCATM we encourage you to participate in new days of citizen science and we call on new educational centers that want to get on board this unique opportunity:

Join the experience! Contact #MelanogasterCTF through this form and become the DNA of a great scientific challenge!