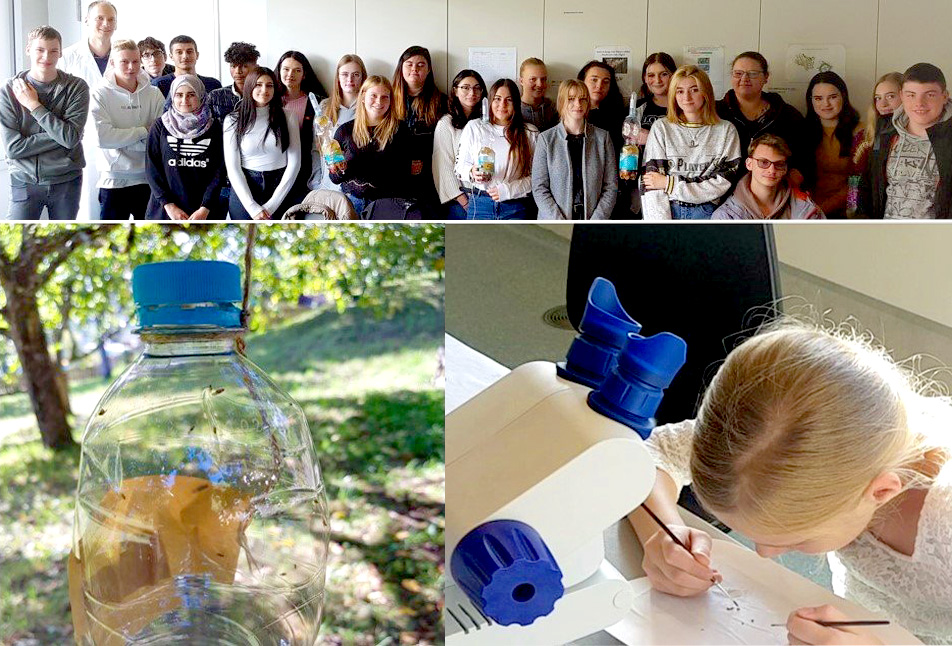 The Justus von Liebig school in the German state of Baden-Württemberg, has joined the  latest 2019-2020 edition of the citizen science project “Melanogaster: Catch the Fly!” (#MelanogasterCTF), led by the Evolutionary and Functional Genomics Lab (González Lab) of the Institute of Evolutionary Biology (CSIC-UPF, Barcelona), ​​and the scientific communication association, La Ciencia en Tu Mundo.

The #MelanogasterCTF citizen science project proposes a synergistic collaboration between scientists and schools and high schools. Scientists prepare educational materials about the scientific aim of the project while training teachers and students about the techniques required to collect, classify, and analyze the target organism, Drosophila (fruit fly). #MelanogasterCTF allows scientists to access a greater number of biological (fly) samples that would otherwise be impossible, or more expensive and time-consuming to collect. For teachers and students, the project provides an opportunity to become a part of a truly international scientific research project, working hand-in-hand as Citizen Scientists alongside trained scientists. The scientific aim of this project is to study the genomic basis of adaptation, that is, the changes in genetic information that allow organisms to adapt to the environment. The #MelanogasterCTF project has support and funding from the Spanish Foundation for Science and Technology (FECYT) and the European Research Council (ERC).

#MelanogasterCTF has been growing progressively since its pioneering start in 2016, with the participation of two Spanish schools in Baza and Tomelloso; to the current total of 14 participating schools from 6 Spanish regions (Andalusia, Aragon, Castilla-La Mancha, Catalonia, Navarra and Valencian Community). In the current 2019-2020 campaign, they have also been joined by the German Justus von Liebig school, from the municipality of Waldshut-Tiengen (Baden-Wurtenberg), in the heart of the Black Forest.

In the words of Dr. Christian Feller, professor at the Justus von Liebig school: “At the Justus-von-Liebig school in Waldshut (Germany), we feel privileged to cooperate with scientists from the #MelanogasterCTF project, in teaching such an important topic, the genomics of adaptation. Thanks to the excellent educational materials of #MelanogasterCTF, we have participated in field activities and in-depth discussions that have helped us understand this important topic. And collecting flies from the field and examining them under a microscope is fun! ”

The incorporation of this German school is the first milestone in the expansion of the #MelanogasterCTF project throughout Europe and other parts of the world, thanks to the close collaboration of the González Lab, which is also the coordinator of the European Drosophila Population Genomics Consortium, DrosEU, which consists of 61 research groups and 136 researchers from 29 countries in Europe, the Middle East, America and Oceania.

The #MelanogasterCTF project is open to the addition of new schools, both in Spain and in other countries, especially in rural areas. If you are interested in participating or simply knowing more about the project: don’t hesitate to contact us!