Despite COVID-19, the beginning of summer will kick off the fifth sampling campaign for the citizen science project ‘Melanogaster: Catch the Fly! ” (#MelanogasterCTF). Between July and October, more than 15 teachers and 250 students from schools in rural areas from 6 Spanish regions and the German state of Baden-Württemberg will be collaborating with scientists by collecting, classifying, and analyzing biological samples of Drosophila (fruit fly) from nearby cultivated fields. The project has adapted its protocols to comply with hygiene and physical distancing measures that will ensure the safety of all participants.

The #MelanogasterCTF citizen science project, led by the Evolutionary and Functional Genomics Laboratory (González Lab) of the Institute of Evolutionary Biology (CSIC-UPF, Barcelona); ​​and the scientific communication association, La Ciència al Teu Món (Science in your World), allows us to study the genomic basis of adaptation –  which consists of the changes in the organism’s genetic information that allow them to adapt to the environment. The fundamental question that requires answering is: how do organisms adapt genetically to new environments? Answering this question has ramifications for multiple applications that affect the whole of society, such as understanding how viruses adapt to new organisms; a question of particular relevance today in the context of the COVID-19 pandemic caused by the SARS-CoV-2 virus.

#MelanogasterCTF contributes directly to the objectives of the European Drosophila Population Genomics Consortium, DrosEU, which has 61 laboratories in 29 countries from Europe, America, the Middle East, and Oceania. The collection and classification of Drosophila (fruit fly) samples by students, teachers, and other citizen scientists participating in #MelanogasterCTF, facilitates, accelerates, and economizes the research process by allowing professional scientists to focus in the genetic data analysis and data interpretation. The work of the DrosEU network, in collaboration with the #MelanogasterCTF project, has already provided us with some interesting results, such as the discovery of the “Tomelloso virus”, which infects Drosophila melanogaster; or the creation of the first European map of the genetic variation found in this species.

For each sampling campaign of the #MelanogasterCTF project, students and teachers go to nearby orchards, where they catch Drosophila (fruit flies) next to fallen fruit, which is not useful as food. In order to do this, they use materials provided or inspired by the project, such as entomological aspirators and traps built with embroidery taborets. The drosophila are then put to sleep and classified according to their sex (female or male) and species: Drosophila melanogaster, Drosophila simulans, Drosophila suzukii, or another. This is done in the high school’s laboratories, either with the high school’s own magnifying glasses or with devices created by the #MelanogasterCTF project, which go by the name of Magni-Fly. These devices allow us to turn any smartphone into a suitable magnifying glass. Once classified, the drosophila are sent to the scientific laboratories to have their DNA analyzed and sequenced. It is important that we carry out these collections every year, in order to be able to follow the changes in the environment and how they relate to the new generations of flies and their genetic variation.

From its inception in 2016, #MelanogasterCTF has grown from two Spanish schools, in Baza and Tomelloso, to the current total of 14 participating schools in 6 Spanish regions (Andalusia, Aragon, Castilla-La Mancha, Catalonia, Navarre, and the Valencian Community). In the lastest 2019 edition, the German school of Justus von Liebig in the municipality of Waldshut-Tiengen (Baden-Württenberg), in the heart of the Black Forest, also joined #MelanogasterCTF. We are now also preparing to incorporate new schools from France, Italy, Portugal, Serbia, and Turkey.

The #MelanogasterCTF team encourages all educational centers, teachers, and students to be part of this project that allows you to come into direct contact with leading international research. We also invite current participants in the project to involve their friends, neighbors, agricultural stakeholders, and related entities (e.g. environmental protection); since this will allow us to expand the magnitude of the project and your actions. Finally, we remind you that the project is open to other countries, whether they are in Europe, South America, or the rest of the world. You can contact us via the Contact section, or through email at rtorres@fruitfly.eu

Given the circumstances that society is going through during the COVID-19 pandemic, this year’s sampling campaign is expected to be special. The original protocol for capturing biological samples works well within protective measures against COVID-19, as it requires that participants collect as far away from each other as possible, in order to ensure that the captured Drosophila (fruit flies) are representative of the whole Drosophila (fruit fly) population inhabiting that field. In addition, the participants will either work as individuals or be organized into small groups, in order to keep the correct physical distance. Official protocols and safety recommendations – such as maintaining a safe distance and wearing a mask – will be followed at all times. In addition, entomological aspiration will be performed individually, the fieldwork materials will not be shared, and all materials will be disinfected between use by different people.

This citizen science project proposes a synergistic collaboration between scientists and schools and institutes. In this project, scientists prepare educational materials about our scientific objectives, while training teachers and students in the use of techniques that allow the sampling, classification, and analysis of the study organisms, the Drosophila (fruit flies). The project allows scientists to access a number of biological samples (flies) that would have otherwise been impossible, or much more costly in time, money, and material resources to obtain. For teachers and students, the project represents an opportunity to become part of a truly international scientific research project, working as scientific citizens hand in hand with professional scientists. The scientific objective of the project is to study the genomic basis for adaptation, which consists of the changes in genetic information that allow organisms to adapt to the environment. The #MelanogasterCTF project has the support and funding of the Spanish Foundation for Science and Technology (FECYT) and the European Research Council (ERC). 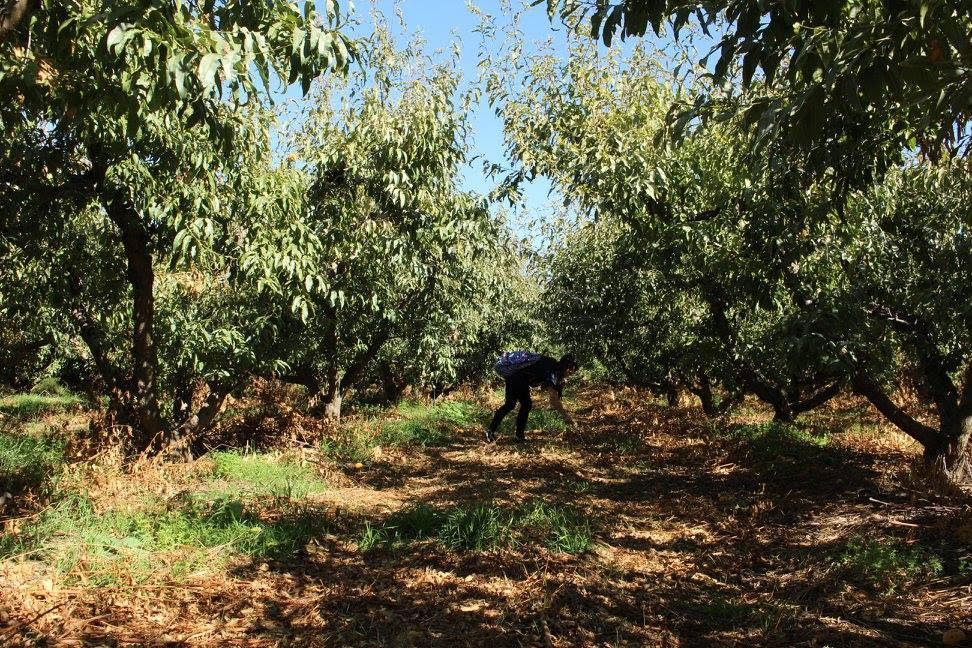 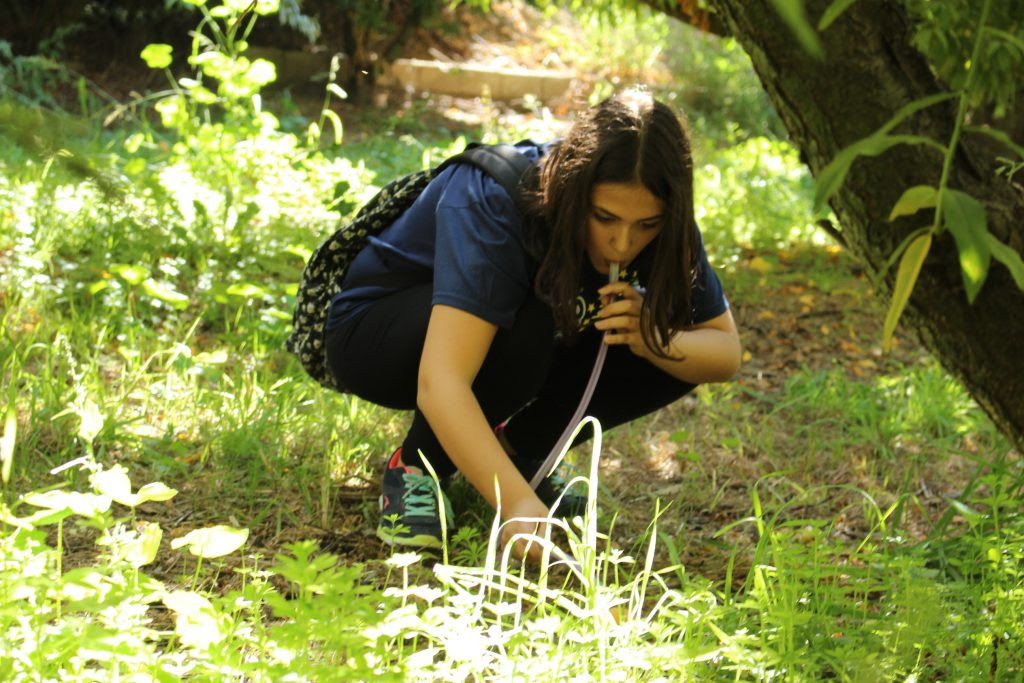 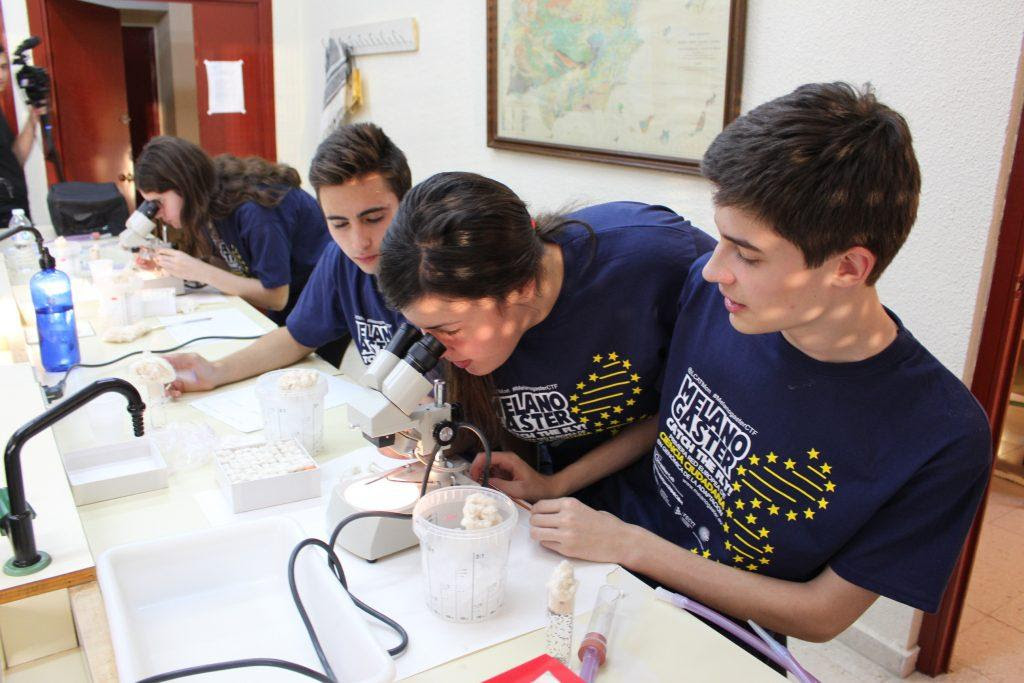 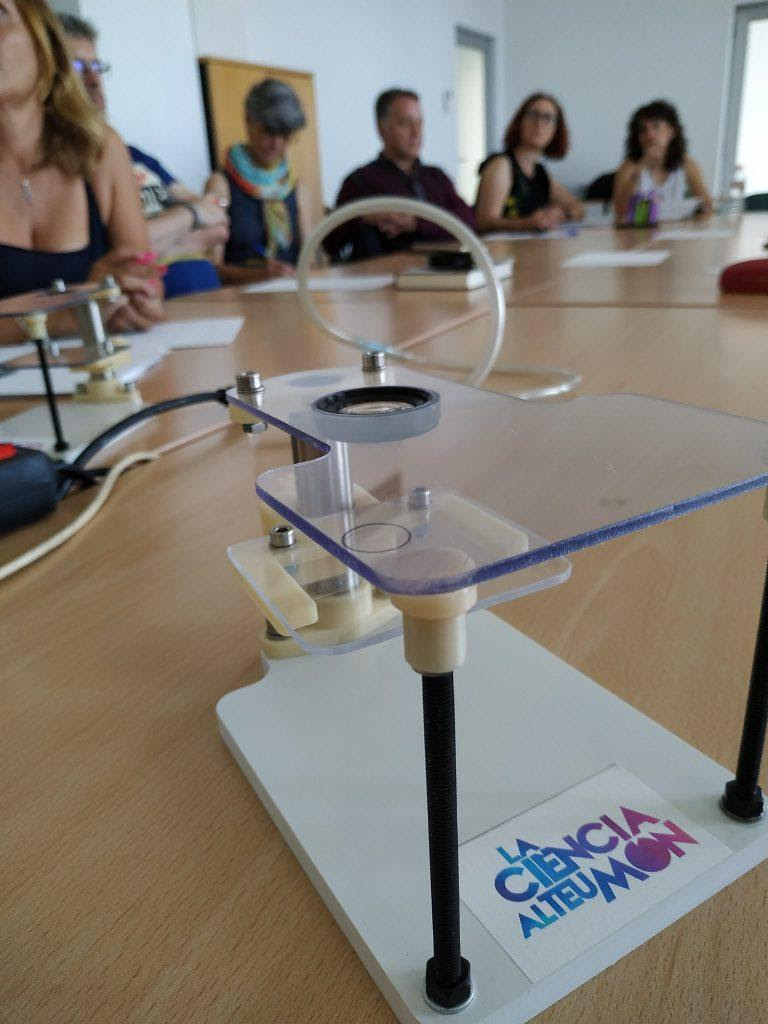 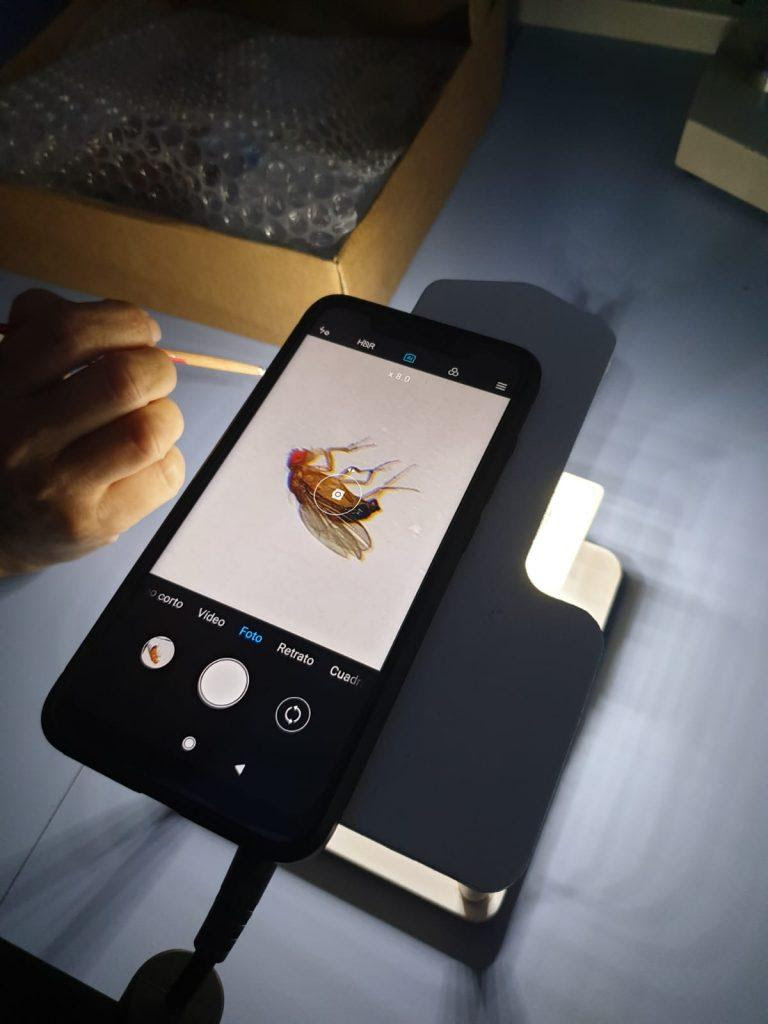 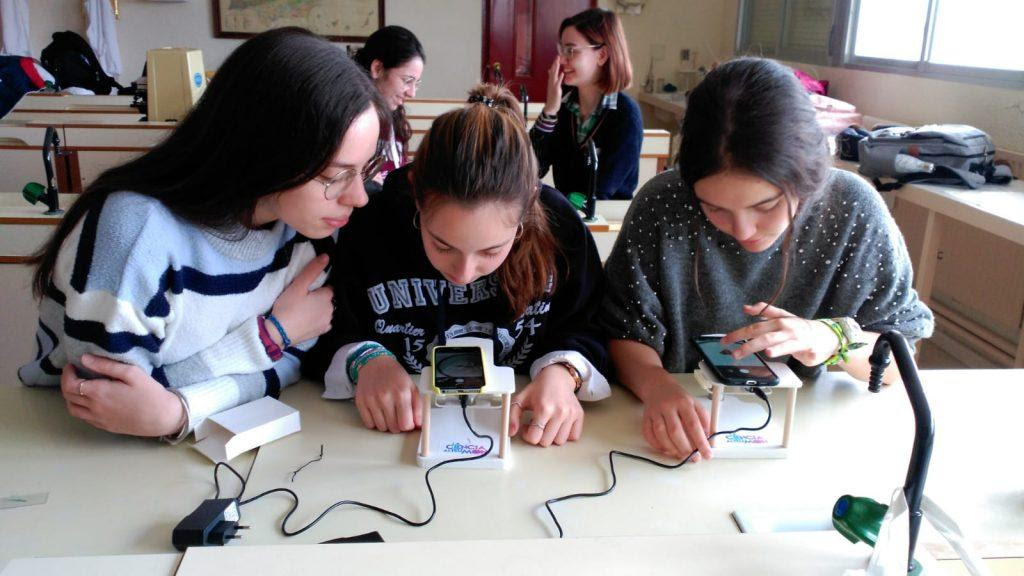 MCTF is the first European citizen science network on adaptation genomics and offers the possibility of experiencing scientific work by leading researchers in this field of biology.

(Continue reading on the website of the Barcelona Museum of Natural Sciences.) [Catalan]

END_OF_DOCUMENT_TOKEN_TO_BE_REPLACED

José de Mora High School participates in the Melanogaster Catch The Fly! project, in the framework of the first European network of citizen science in adaptation genomics. #MelanogasterCTF is a European citizen science project in which researchers, communicators, teachers, primary and secondary students and citizens work with the common goal of understanding how organisms adapt to the environment, taking as a model the fruit fly, Drosophila melanogaster.

(Continue reading on the website of the Baza municipality.) [Spanish]

END_OF_DOCUMENT_TOKEN_TO_BE_REPLACED

Students in the 4th year of ESO, 1st and 2nd year of Baccalaureate Science of the Benjamín de Tudela High School participate for the first time in the European project Melanogaster, Catch the fly!, first European Network of Citizen Science in Adaptation Genomics. Researchers from more than 15 countries participate in the project, as well as communicators, teachers and students from Primary and Secondary education, with the objective to understand how organisms adapt to the environment, taking as a model the fruit fly (Drosophila melanogaster).

END_OF_DOCUMENT_TOKEN_TO_BE_REPLACED

Professors and students of the center have made an excellent contribution, which eventually enabled the discovery of the Tomelloso virus.

The Eladio Cabañero high school of Tomelloso had a historic day yesterday, with the presentation of the #MelanogasterCTF citizen science project, of which students and teachers from the center have made a great contribution. The project, which began in October 2016 with the participation of over 200 students, has involved researching the adaptation genomics of the so-called fruit fly (Drosophila melanogaster) in different environments. This methodical and rigorous work, endorsed by the European Network of Citizen Science, has led to the discovery of the so-called Tomelloso Virus.

END_OF_DOCUMENT_TOKEN_TO_BE_REPLACED

The Eladio Cabañero High School of Tomelloso lived yesterday a historic day with the presentation of the scientific project ‘Melanogaster: Catch the Fly!’ in the dependencies of the IRIAF (Regional Institute of Research and Agri-Food and Forest Development), also based in Tomelloso.

END_OF_DOCUMENT_TOKEN_TO_BE_REPLACED

The project has been carried out in its initial phase by professors from the Biology Department of the Eladio Cabañero High School, with the participation of more than 200 students. The project “Melanogaster: Catch the fly!” studies the well-known fruit fly, technically Drosophila melanogaster.

END_OF_DOCUMENT_TOKEN_TO_BE_REPLACED

This Saturday, March 9, at 6 PM and in the Assembly Hall of the IRIAF and IVICAM (former School of Foremen) of Tomelloso, the results of the project “Melanogaster: Catch the Fly!” will be presented. A project in which the Eladio Cabañero High School participates, together with the Institute of Evolutionary Biology dependent on the Spanish National Research Council and the Pompeu-Fabra University of Barcelona, ​​and with the collaboration of the Excellent City Council of Tomelloso.

Researchers from the Institute of Evolutionary Biology, a joint center of the CSIC and UPF, have identified 300 mobile elements of DNA that contribute to adaptation to the environment, a key aspect to the evolution of species. Published in PLOS Genetics, it is the most extensive study to date, analyzing the mobile elements of DNA from 60 natural populations of fruit flies. The work sheds light on the adaptive mechanisms involved in stress response, embryonic development, or behavior.

END_OF_DOCUMENT_TOKEN_TO_BE_REPLACED

On March 9, at 6:00 PM, the results of the “Melanogaster: Catch the Fly!” will be presented. It is an initiative in which the Eladio Cabañero High School participates, together with the Institute of Evolutionary Biology dependent on the Spanish National Research Council and the Pompeu-Fabra University of Barcelona, ​​and with the collaboration of the Most Excellent City Council of Tomelloso.

(Continue reading in The Voice of Tomelloso.) [Spanish]

END_OF_DOCUMENT_TOKEN_TO_BE_REPLACED

On March 9, at 6:00 PM and in the IVICAM Assembly Hall, the presentation of the results of the ‘Melanogaster: Catch the Fly!’ project will be presented. In this project, the Eladio Cabañero High School participates together with the Institute of Evolutionary Biology dependent on the Spanish National Research Council and the Pompeu-Fabra University of Barcelona, ​​and with the collaboration of the Excellent City Council of Tomelloso.

END_OF_DOCUMENT_TOKEN_TO_BE_REPLACED

Join us tomorrow at 4pm ET for the last Biology Colloquium of the semester! @HarmitMalik from @HutchBasicSci will discuss how mutation screens reveal the constraints and adaptive potential of antiviral proteins. Event details: bit.ly/33vKMKh Retweeted by LaCiènciaAlTeuMón

IPHES work in progress 1 day ago 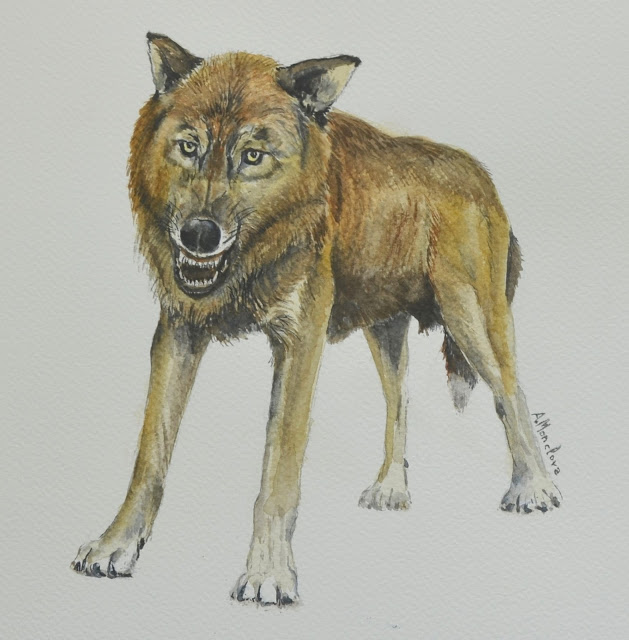 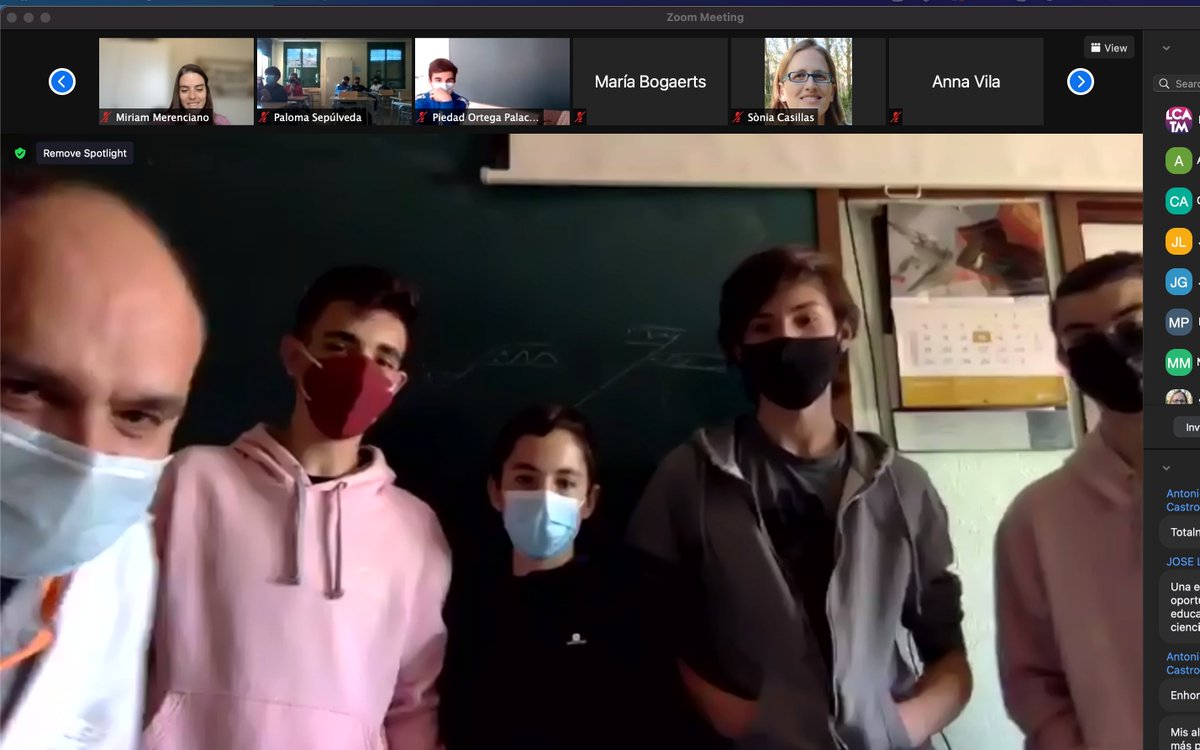 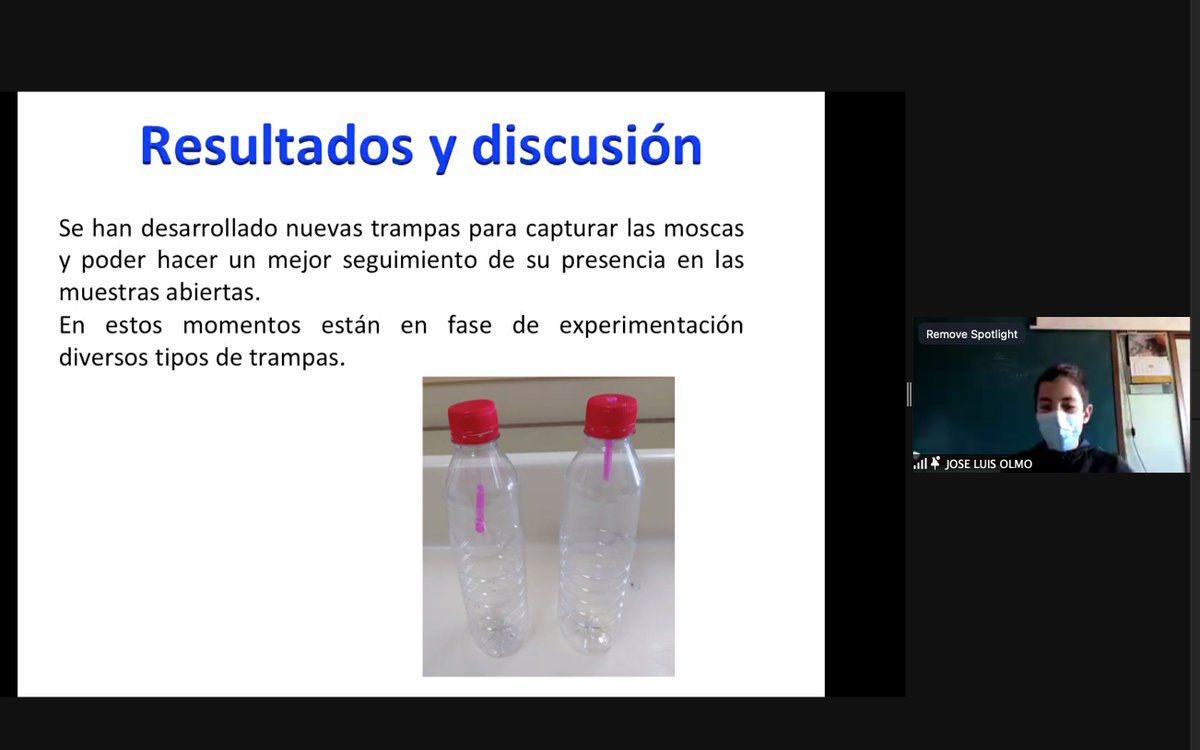