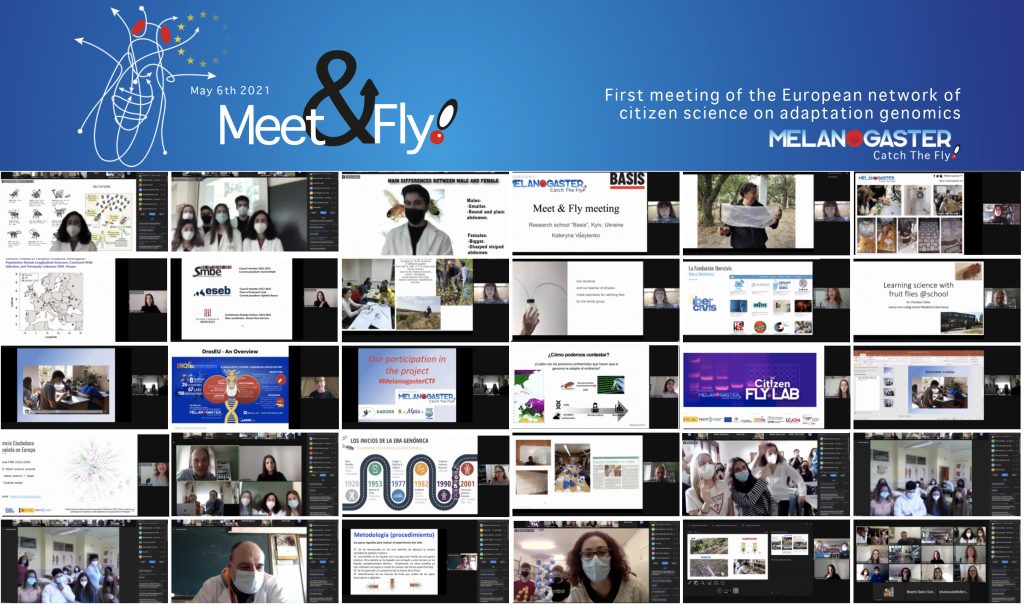 The first edition of Meet & Fly meeting took place using a virtual format on Thursday, May 6th 2021. Students and teachers from twelve Spanish schools, one German and two Ukrainian schools participated in the meeting.

For the first time, students and teachers from both national and international schools interacted and shared their experiences related to the citizen science project known as Melanogaster: Catch The Fly! (#MelanogasterCTF). In the #MelanogasterCTF project, researchers, communicators, teachers, high school students and local communities work together to discover how organisms adapt to the environment. These studies are carried out by analysing the genome of the fruit fly, Drosophila melanogaster.

The objectives of the Meet & Fly meeting have been to:

The event began with a presentation about the #MelanogasterCTF project by Dr. Josefa González, principal investigator of Functional and Evolutionary Genomics Laboratory (González Lab) at the Institute of Evolutionary Biology (IBE, CSIC-UPF), and co-founder of DrosEU. To contextualize the importance of the project, Prof. Thomas Flatt, co-founder of DrosEU and professor of Evolutionary Biology in the Department of Biology at the University of Freiburg, gave a speech about the relevance of this project for the DrosEU community. During the morning, more specialized presentations on the project topics were carried out. One presentation about evolutionary biology was given by Dr. Miriam Merenciano, a postdoctoral researcher at the González Lab. Two more presentations were about bioinformatics, one presented by Dr. Sònia Casillas, associate professor and researcher in the Department of Genetics and Microbiology at the UAB; and the other by Maria Bogaerts, a predoctoral researcher at the González Lab. Irene González, who currently works as a consultant in Ampers and Consulting but previously did her bachelor’s research work at the González Lab, gave a talk about the design and the development of the MagniFly tool, a magnifying glass.

Apart from the scientific talks, there were two conferences at the meeting about citizen science. One focused on the #MelanogasterCTF project given by Roberto Torres, communication director of Science in Your World (LCATM); and another, more general talk about citizen science evolution, challenges and opportunities in Spain and Europe, which was given by Maite Pelacho, coordinator of the Citizen Science Observatory in Spain, a project of the Ibercivis Foundation carried out in collaboration with the Spanish Foundation for Science and Technology (FECYT).

Finally, to demonstrate all the work carried out by the participating schools, seven Spanish schools (IES Carpetania in Yepes, IES Benjamín in Tudela de Navarra, IES Eladio Cabañero in Tomelloso, IES Antonio José Cavanilles in Alicante, CES Ramón y Cajal in Granada, Colegio Mare de Déu de l’Olivar II in Alaquàs and IES Azuer in Manzanares) and three international schools (Justus-von-Leiebig-Shule Waldshut in Waldshut-Tiengen in Germany and Shkola Bazys in Kiev and Mirya School in Odessa, both in Ukraine) gave presentations about their contributions to the project. These presentations reflected the enthusiasm, the motivation, and the interest that the students and teachers have for the project.

On the project website, the program for the 1st Meet & Fly meeting is available, along with all the presentations made by the speakers and participating schools.

During the five intense hours that the meeting lasted, the interactions between the students and the speakers were very active. The students asked the speakers a lot of questions, demonstrating their curiosity and intrigue about the project. This was also reflected in the chat of the videoconference platform used, as well as in the WhatsApp group that was created to allow more direct and personal interactions with teachers. Both chats were very active, with both questions and doubts, and congratulatory messages.

“We were very happy to see the motivation and the involvement of students and teachers. Without their collaboration—in both the logistical organization of the meeting and in the preparation of content—it would not have been possible to hold a day like this. We are convinced that this has been the first of many meetings”, said the organizers.

Meet & Fly is an activity that takes place within the citizen science project #MelanogasterCTF and it is organized by the Evolutionary and Functional Genomics Laboratory (Dra. González Lab) of the Institute of Evolutionary Biology (IBE, CSIC-UPF) and the scientific dissemination platform Science in Your World (LCATM), in collaboration with Genomics, Bioinformatics and Evolution (GGBE) Group from Department of Genetics and Microbiology at the UAB and the European Drosophila Population Genomics Consortium (DrosEU). This project is publicly funded by the European Research Council (ERC), the Spanish Foundation for Science and Technology (FECYT) and the CSIC General Foundation (FGCSIC).